Courting Democracy in Bosnia and Herzegovina: The Hague Tribunal's Impact in a Postwar State

The International Criminal Tribunal for the former Yugoslavia (ICTY) struggled to apprehend and try high-profile defendants like the Serbian leader Slobodan Milošević, and often received more criticism than praise. This volume argues that the underappreciated court has in fact made a substantial contribution to Bosnia and Herzegovina’s transition to democracy. Based on more than three years of field research and several hundred interviews, this study brings together multiple research methods, including surveys, ethnography, and archival materials, to show the court’s impact on five segments of Bosnian society, emphasizing the role of the social setting in translating international law in domestic contexts. Much of the early rhetoric about the transformative potential of international criminal law helped foster unrealistic expectations that institutions like the ICTY could not meet, but judged by more realistic standards, international law is seen to play a modest yet important role in postwar transitions. The findings of this study have implications for the study of international courts around the world and the role law plays in contributing to social change. 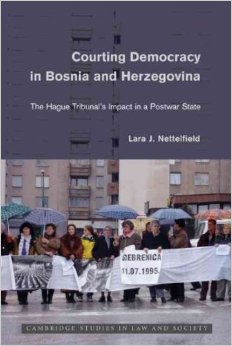