This new biography of Herbert H. Lehman -- four-time Governor of New York State, U.S. Senator, humanitarian, and political reformer -- fills the void left by scholars who have neglected this revered public servant of the mid-20th Century. Based on extensive research in archival sources, this comprehensive account of Lehman's political career -- the first such work in fifty years -- restores Herbert Lehman to his rightful place among the pantheon of liberal heroes of his era.

By focusing on Lehman's interactions with Lillian Wald, Al Smith, Franklin Roosevelt, Harry Truman, John Kennedy, and Lyndon Johnson, Tananbaum shows how Lehman succeeded politically, winning statewide election eight times, despite his refusal to compromise with his conscience. Lehman's honesty, integrity, and his dedication to principle led him to oppose FDR's court-packing plan, confront Senator Joe McCarthy and vote against the McCarran Internal Security Act of 1950 when the "Red Scare" was at its height, and challenge Carmine De Sapio and the bosses who controlled the Democratic Party in New York. No wonder Eleanor Roosevelt and others described Herbert Lehman as "the conscience of the Senate."

In his thirty-five years of public service, Herbert Lehman fought the Republicans in the State Legislature to provide economic security for New Yorkers during the Great Depression, and he battled bureaucrats in the Roosevelt and Truman administrations and Congress to enable the United Nations Relief and Rehabilitation Administration to feed the starving people of Europe and Asia during and after World War II. His efforts on behalf of "the welfare state," civil rights legislation, and immigration reform helped keep the liberal agenda alive until Congress, and the nation, were ready to enact it into law as part of Lyndon Johnson's Great Society in 1964-1965. 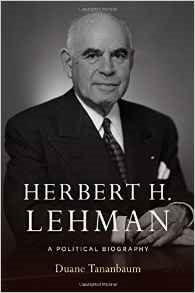 Biography & Autobiography
Back to Top