The Upper West Side

The Upper West Side of Manhattan, the residential and retail neighborhood between Central Park and the Hudson River, is famous for its liberalism, cosmopolitan culture, and appetizing. It is a neighborhood as diverse in its population as it is in its architecture. Known as Bloomingdale in the mid-19th century, it was renamed the West End by the century's end when real estate speculation and mass transportation made their way inevitably northward in Manhattan. It was at this time that the grand boulevards and avenues Central Park West, Broadway, Columbus Avenue, Amsterdam Avenue, West End Avenue, and Riverside Drive each quickly assumed their impressive and distinct characters.

Michael V. Susi is the author of Columbia University and Morningside Heights. He has gathered over 200 vintage postcard images for The Upper West Side, spanning the early decades of the 20th century, when the neighborhood invented and reinvented itself, through this time of dramatic changes in transportation, housing, and entertainment. 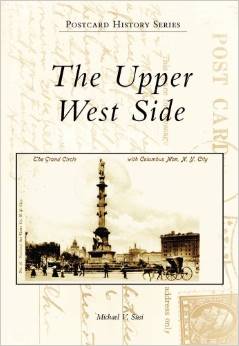