Wondrous Beauty: The Life and Adventures of Elizabeth Patterson Bonaparte

From the award-winning historian and author of Revolutionary Mothers (“Incisive, thoughtful, spiced with vivid anecdotes. Don’t miss it.”—Thomas Fleming) and Civil War Wives (“Utterly fresh . . . Sensitive, poignant, thoroughly fascinating.”—Jay Winik), here is the remarkable life of Elizabeth Patterson Bonaparte, renowned as the most beautiful woman of nineteenth-century Baltimore, whose marriage in 1803 to Jérôme Bonaparte, the youngest brother of Napoleon Bonaparte, became inextricably bound to the diplomatic and political histories of the United States, France, and England.

In Wondrous Beauty, Carol Berkin tells the story of this audacious, outsized life. We see how the news of the union infuriated Napoleon and resulted in his banning the then ­pregnant Betsy Bonaparte from disembarking in any European port, offering his brother the threat of remaining married to that “American girl” and forfeiting all wealth and power—or renouncing her, marrying a woman of Napoleon’s choice, and reaping the benefits. 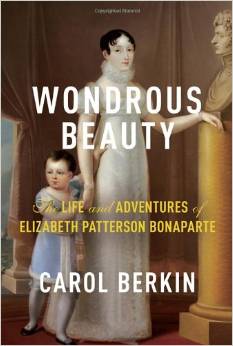